In early September, the London Theatre Consortium, a body made up of London’s leading Off-West End producing theatres, dispatched theatre writers, directors, facilitators and performers to the beautiful surroundings of Hawkwood College, for the second Artist Climate Lab, a week-long residency for theatre artists to explore how their work can be informed and shaped by issues concerning climate justice and environmental activism. The week was made possible through funding from Arts Council England.

It’s great living in London – in my opinion, the most cosmopolitan and bustling city in the world. But sometimes living in this city can sit on you, wear you down and degenerate you. It is not always a conducive environment to think and make work in. What a fantastic opportunity therefore, to escape temporarily to a place where the concept of time, and taking time is valued for the importance it holds, to a place where the link between the food we eat and where it is sourced from is literally visible, to a place where all are valued for the work they do in contributing to the upkeep of the local ecosystem.

We thank Hawkwood College for providing this sanctuary and for nurturing and incubating such a safe and welcome and creative space for artists.

Throughout the week we were visited by artists and activists who shared their work and ideas on how we can all contribute to a more just and progressive society on both a micro and macro level – be these ideas simple individual actions we can all take, or radical rethinking of political structures.

Lucy Latham from arts environmental charity Julie’s Bicycle kicked off the week with the science and context from which we can all begin our own journeys on climate activism and justice. Baroness Lola Young shared her work on making the fashion and sport industries more ethical places, and the need to be neither a pessimist nor optimist, but a realist. Journalist Paul Mason spoke about turning his book Why It’s Kicking Off Everywhere into a play at the Young Vic, as well as a much-needed insight into the ever-changing current political situation. The spoken word artist Zena Edwards reminded us that climate justice is not something that we need to think about in the future, but is very much a present-day struggle for many indigenous communities. Her work also made the link between the body and the natural environment. We were also joined by two of the artists from last year’s Artist Climate Lab; theatre-maker Tassos Stevens, on incorporating game-theatre into consciousness raising and choreographer Ellie Sikorski on ensemble work. It was inspiring to hear from Jojo Mehta on the ongoing work that she is doing on making ecocide a recognised global crime, carrying on the job she began with lawyer Polly Higgins, who visited ACL last year before her very sad death earlier this year. She is much missed. The theatre-maker and dramaturg Zoe Svendsen shared her ideas on concepts relating to ‘high carbon culture’ and the link between the City of London and many of the world’s climate and social injustices. Performance Activist Dan Glass led a fantastic session on examples of successful activism and protest from history and what we can learn from this. Dan first became known when he superglued himself to then-Prime Minister Gordon Brown, in protest over a third runway at Heathrow Airport. Poet Selina Nwulu spoke about the link between urban isolationism and loneliness, and how this is connected to lethargy around climate action. Her work on how black and brown bodies are often ‘collateral damage’ in climate emergencies struck the group on how climate justice is truly and intersectional issue. We were also joined by local MP David Drew, who gave an interesting insight into the realities of rural living, an insight that was very new to most of the urban artists.

It was really fantastic that this was hosted by Hawkwood College and we hope that the Artist Climate Lab can be rolled out again in the years to come as we all continue our work and campaigning on the hyper-wicked, intersectional, ever-changing issue of climate justice. 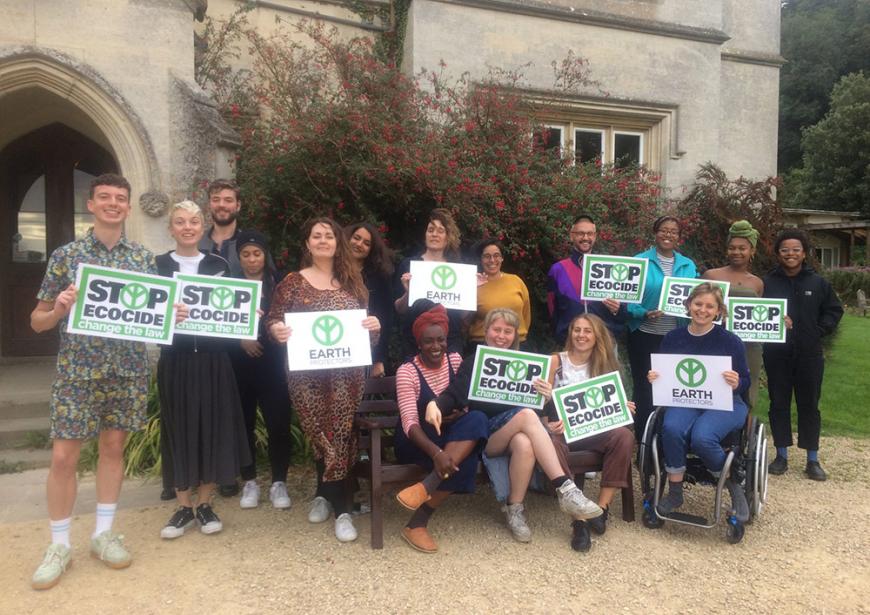