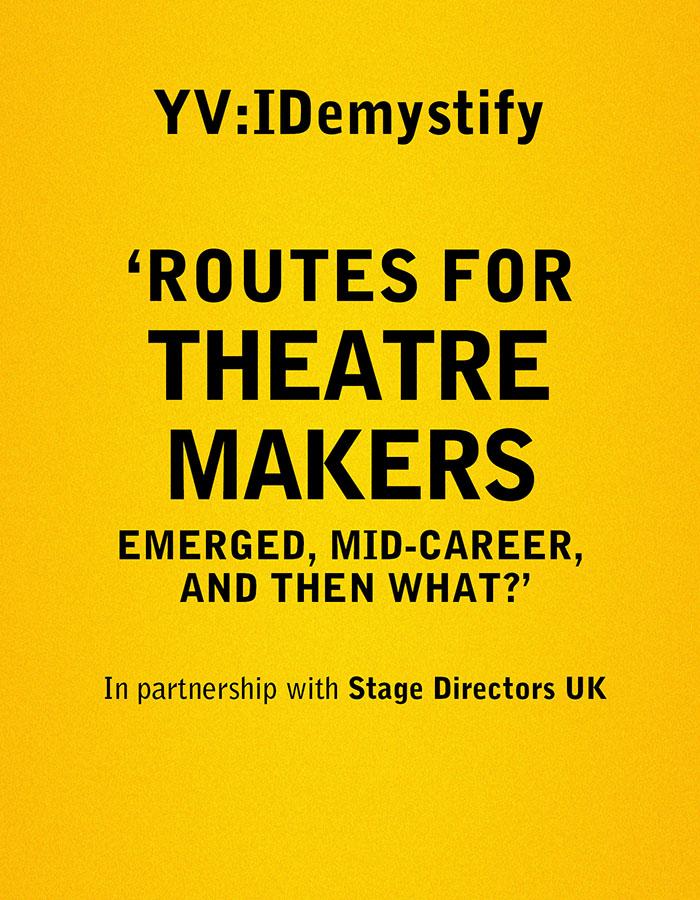 Emerged, Mid-Career, And Then What?

In partnership with Stage Directors UK

Free, only one ticket can be booked per person

THIS PRODUCTION IS NOW SOLD OUT

We will be in touch if we are able to allocate you a ticket. Please bear in mind tickets may only become available a short time before the event if due to take place.

This event is aimed at mid-career director-theatre makers who have had their first couple of shows (self-)produced and wish to progress to the next stage in their career. Whereas an earlier generation of theatre practitioners may have relied on an infrastructure of associate and artistic directorships as next steps in their pathway in the industry, such opportunities and positions are increasingly hard to find.

It has frequently been argued that the theatre sector is shaped like a sand-timer, with a large base of early-career practitioners entering the field, an expansive set of arts leaders and successful freelancers at the top, but a bottleneck in the middle with few (long-term) opportunities and security. Where can mid-career makers, too experienced for emerging talent schemes but not yet on the next tier, turn to so as not to get stuck? As the sector is pulling out of the stagnation and damage of 2020, how can it foster steadier paths and progression for experienced makers? What examples of innovative pathways may offer inspiration to those feeling they’re stuck in the middle?

Stage Directors UK is the professional trade organisation for stage directors across the UK. The organisation represents the interests of stage directors and campaigns for better rights and working conditions. SDUK aims to provide a sense of community and a unifying network for its members, and offers support, training and professional development. SDUK is “by directors, for directors.”

In partnership with Stage Directors UK

Stage Directors UK is the professional trade organisation for stage directors across the UK. The organisation represents the interests of stage directors and campaigns for better rights and working conditions. SDUK aims to provide a sense of community and a unifying network for its members, and offers support, training and professional development. SDUK is “by directors, for directors.”

Pooja Ghai is an award-winning theatre practitioner who started out as an actor before turning to directing and working at venues including Shakespeare’s Globe, Kiln Theatre, Tamasha, Soho Theatre, Kali Theatre and Manchester’s Royal Exchange. She was Associate Director at Theatre Royal Stratford East from 2015 to 2017 and is currently Associate Artist at Kali Theatre as well as Co-Chair of Artistic Directors of the Future.

Apart from extensive experience working in higher education, Pooja has held a range of roles in arts governance, including as board member for Pop-Up Projects, and as Creative Producer for Up Next - an initiative set up by ADF, Bush Theatre and Battersea Arts Centre. She was a judge on the James Tait Black Playwrighting and Pitch your Play, and mentored on the Old Vic’s Bayliss Director Scheme 2019.

Roy Alexander Weise is joint Artistic Director of Manchester’s Royal Exchange Theatre, as well as Associate Artist at the Donmar Warehouse. As director, his work includes Master Harold and The Boys, Nine Night (also in the West End) and Dead Don't Floss at the National Theatre, The Trick at the Bush Theatre and on UK tour, The Dark for Fuel at Ovalhouse and Bristol Tobacco Factory, and Br’er Cotton at Theatre503. He won the James Menzies-Kitchin Award and directed The Mountaintop at the Young Vic and for a UK Tour. For National Youth Theatre, he has directed Jekyll and Hyde; other directing includes Heretic Voices at Arcola Theatre, The Ugly One for Buckland at the Park, Primetime at the Royal Court, and Stone Face at the Finborough Theatre.

He previously worked as a trainee director at the Royal Court, was a BBC Theatre Fellow at the Bush Theatre and the Lyric Hammersmith, Associate Artist at Harts Theatre Company, Lead Acting Tutor at Young & Talented and Associate Director at The Red Room, as well as a tutor at Open Door.

Live captioning for this event will be provided by Otter.ai