It’s chapter four of our marathon celebration of 50 years of the Young Vic, and we’ve finally reached the new millennium! As the turn of the century was marked with a global celebration, we also celebrated the incoming of Artistic Director David Lan. David is the longest-serving AD of the YV, with an impressive 18 years under his belt.

The ten images below are just a small snapshot of an entire decade of history. We’d love to hear your 00s memories of the theatre, the shows, the people…. Let us know on social, using #YV50 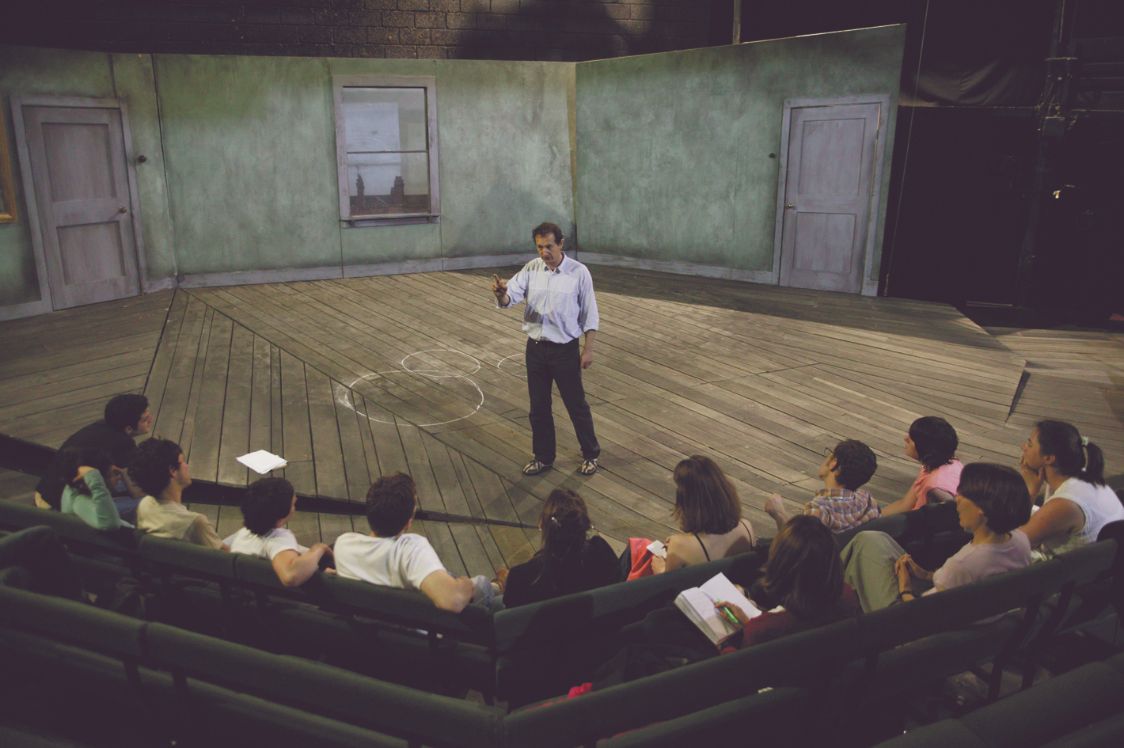 The man himself, Artistic Director David Lan, with a group of early-career directors in 2004. The Young Vic’s Directors Program has now been running for nearly twenty years and is one of the only schemes of its kind. With the help of the Genesis Network (supported by the Genesis Foundation) it provides directors, designers and producers with skills based training, mentoring and the opportunity to make work, and today serves over 1,500 members. 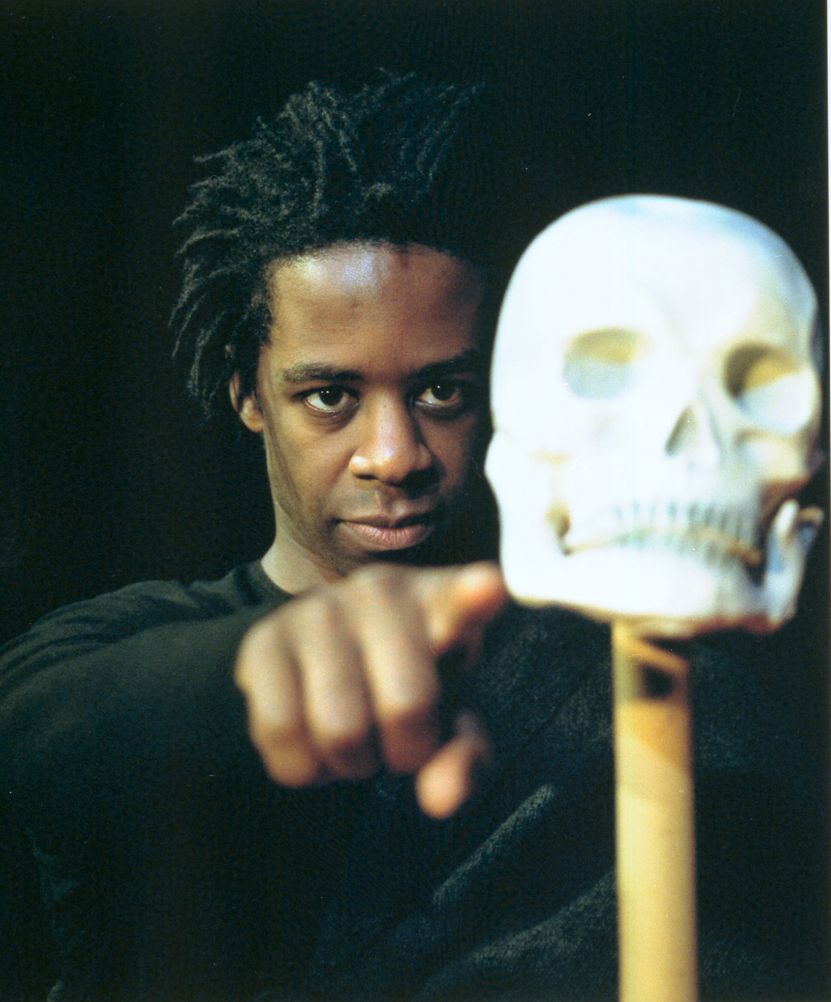 In 2001, Adrian Lester took to the Young Vic stage as Hamlet, directed by legendary theatre director Peter Brook. Brook made radical cuts to the text, meaning the show ran at a swift 2.5hrs without an interval. The Independent describing Lester’s performance as ‘quietly magnetic’ whilst The Guardian deemed it ‘a remarkable performance’. 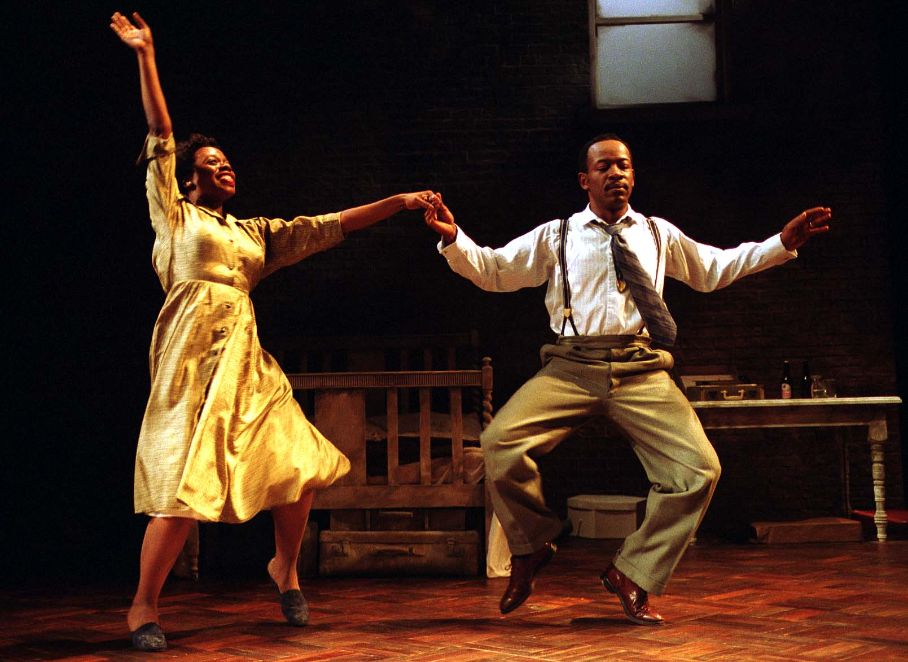 In 2001 the Young Vic David Lan directed the London premiere of A Raisin in the Sun, Lorraine Hansberry's extraordinary play about three generations of a Black family struggling against the racism of the US in the 1950s. This co-production with Salisbury Playhouse starred Lennie James and Cecilia Noble and it was first performed in Salisbury before transferring to the Young Vic in June 2001. It was revived five years later at the Lyric Hammersmith theatre, as part of the Young Vic's Walkabout season. 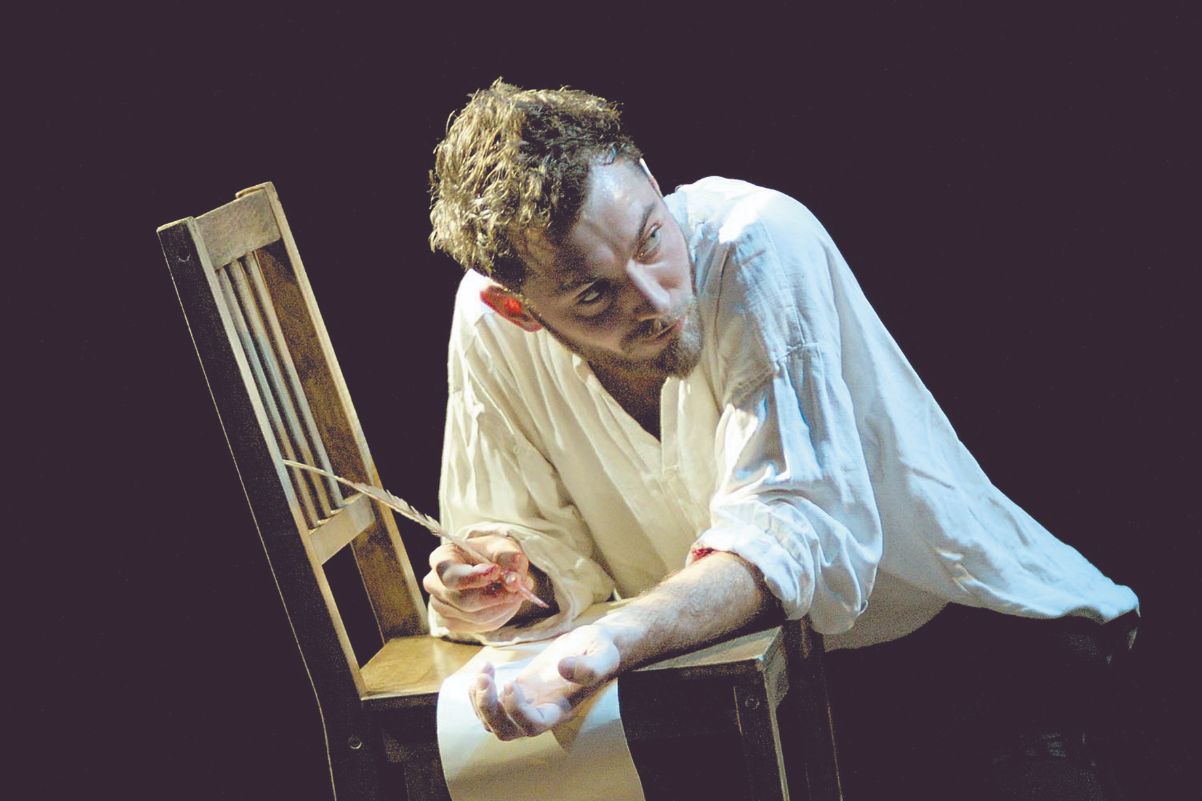 In 2003, David Lan directed Jude Law for the second time in Doctor Faustus. Law grew a beard for the role, joking to the Evening Standard that ‘I don’t think Dr Faustus found much time to shave!’ Law has been a long-time collaborator and supporter of the Young Vic – his first memory of the theatre was coming to the Young Vic on a school trip to watch Sir Ian McKellen and Imogen Stubbs in Othello in 1989. 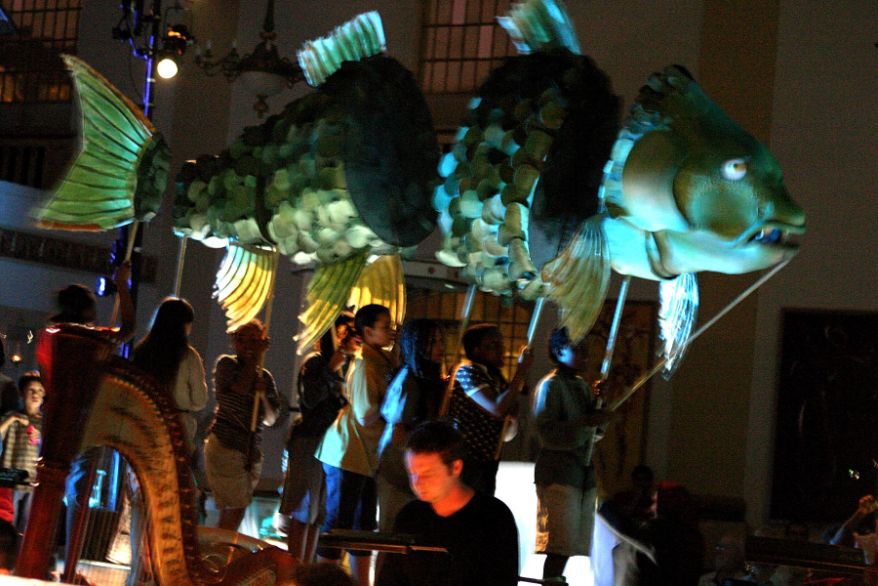 In 2004, the Young Vic went ‘walkabout’ whilst the building closed for a major refurbishment. The YV company took work all around the world, including to a local church, a range of theatres around London, on tour in the UK and Europe and, twice, to New York. Meanwhile, the restoration of the world-famous Young Vic auditorium and the reconstruction of the building began, with design by Steve Tompkins, Haworth Tompkins Architects.

One of the ‘walkabout’ shows, Tobias and the Angel, launched the building’s reopening in 2006. The show was a community opera by Jonathan Dove and David Lan, and it included a cast of over 100 local adults and children, showcasing beautifully our newly renovated performance space. 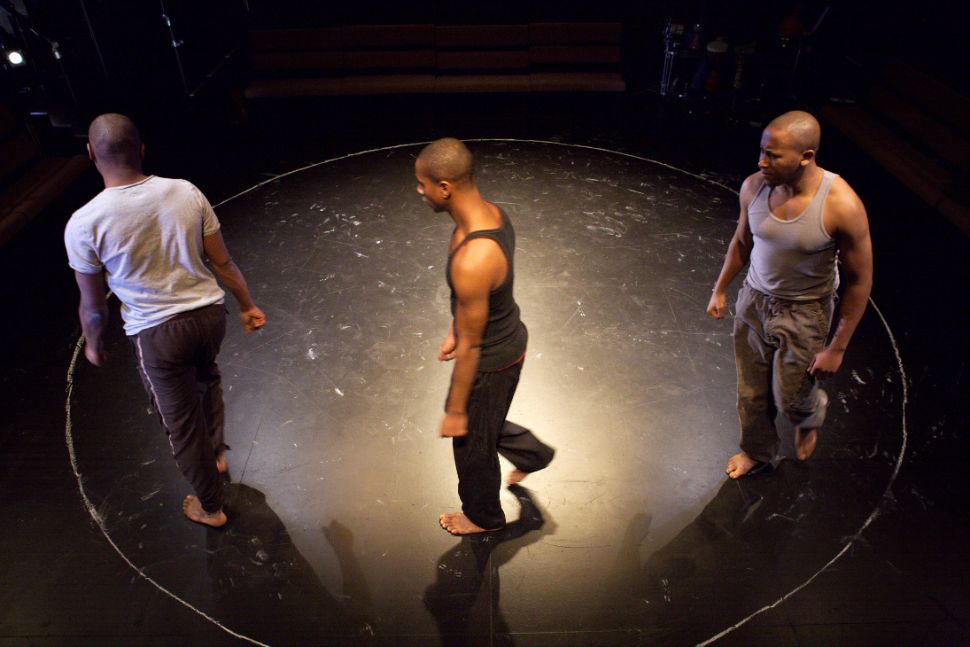 In 2007 and 2008 The Young Vic staged Tarell Alvin McCraney’s The Brothers Size to great acclaim. Audiences leapt to their feet at the end of every performance- something rarely seen in UK auditoriums! Directed by Bijan Sheibani, the show was revived again in 2018, once again to huge acclaim. Giving it 5 stars, Bridget Minamore for The Guardian said “The Brothers Size is a bracing but beautiful snapshot of southern masculinity, and Londoners should feel grateful the Young Vic has brought it back.” 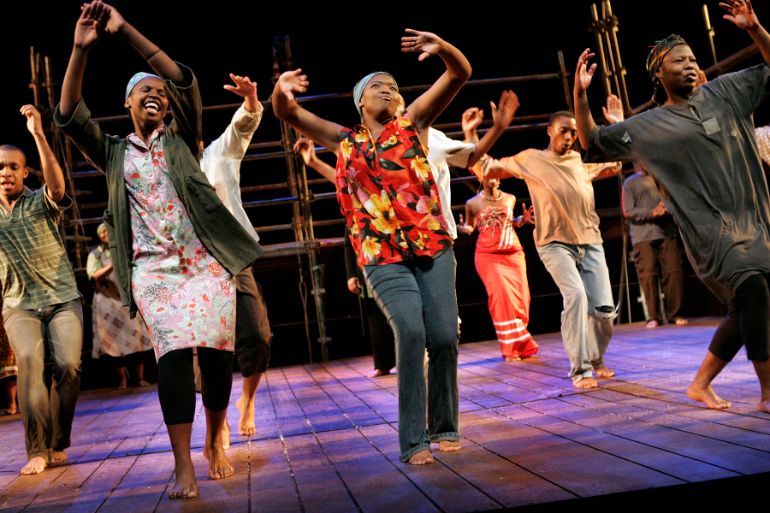 2007 saw the Young Vic stage a double bill in collaboration with Isango/Portobello company: Ikrismas Kherol (A Christmas Carol) and Impempe Yomlingo (The Magic Flute). These South African adaptations premiered at the Baxter Theatre, Cape Town, before transferring to our Main House. The shows won the Whatsonstage Theatre Goers Choice Award for Best Off-West End Production, and Impempe Yomlingo then transferred to London’s West End, where it won the Olivier Award for Best Musical Theatre revival in 2008. 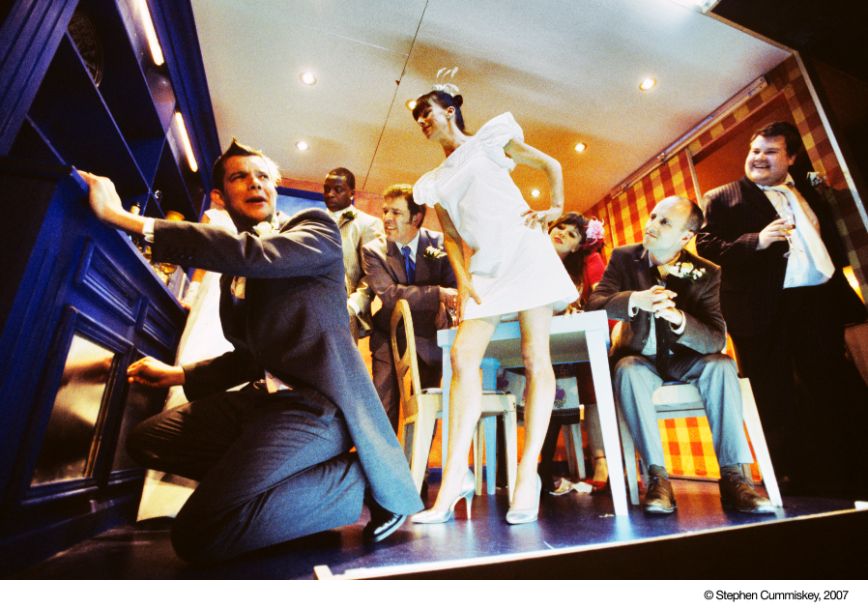 This production image is from A Respectable Wedding in 2007. The show was part of the Young Vic’s ‘Big Brecht Fest’ – our festival of little-known plays by the dramatist Bertolt Brecht. Adapted by Rory Bremner and directed by Joe Hill-Gibbins, the show was performed in The Maria along with Señora Carrar's Rifles directed by Paul Hunter. Meanwhile, in The Clare (our adjacent studio space), Martin Crimp’s adaptation of The Jewish Wife directed by Katie Mitchell played alongside How Much is Your Iron? directed by Orla O’Laughlin. The productions inventively utilised our newly renovated studio spaces and Susannah Clapp for The Observer called the season ‘an exhilarating reinvention’. 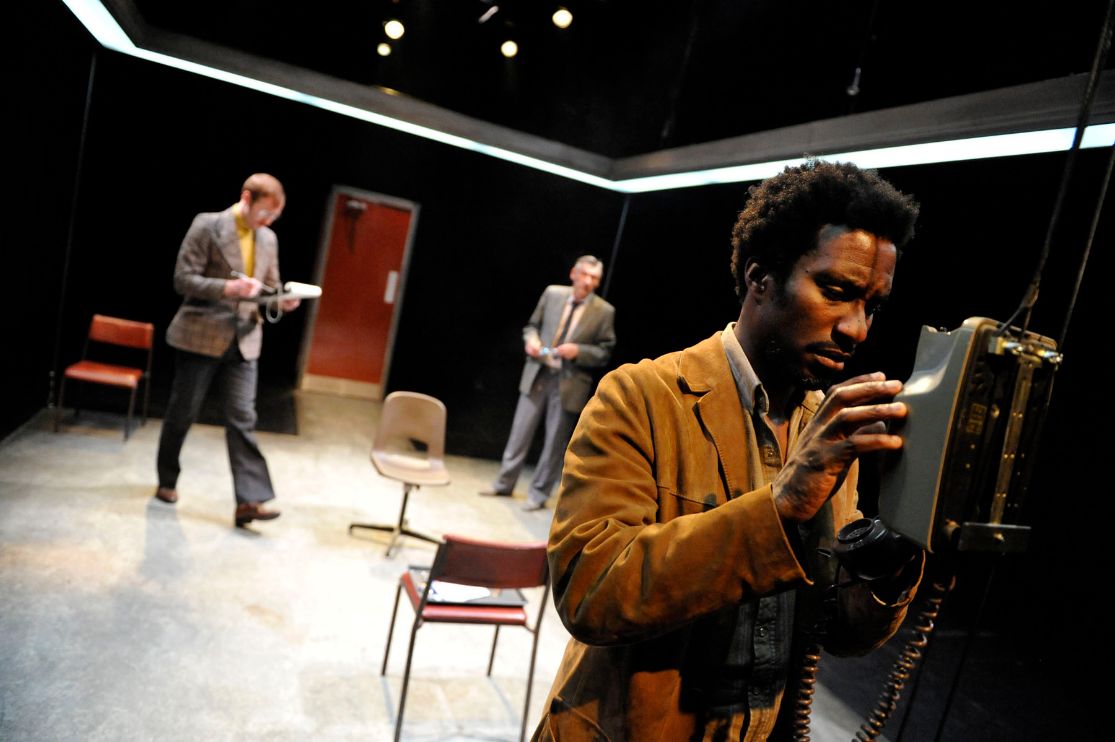 In the lead up to the 2010 General Election, we presented a revival of Barrie Keefe's classic play Sus, in a co-production with Eclipse Theatre, the leading Black-led touring company in the UK. Set on the eve of the Thatcher victory in 1979, Sus is a powerful cry against institutional racism. The production was performed in The Clare and it was directed by Gbolahan Obisesan, who the recipient of the Jerwood Directors Award. 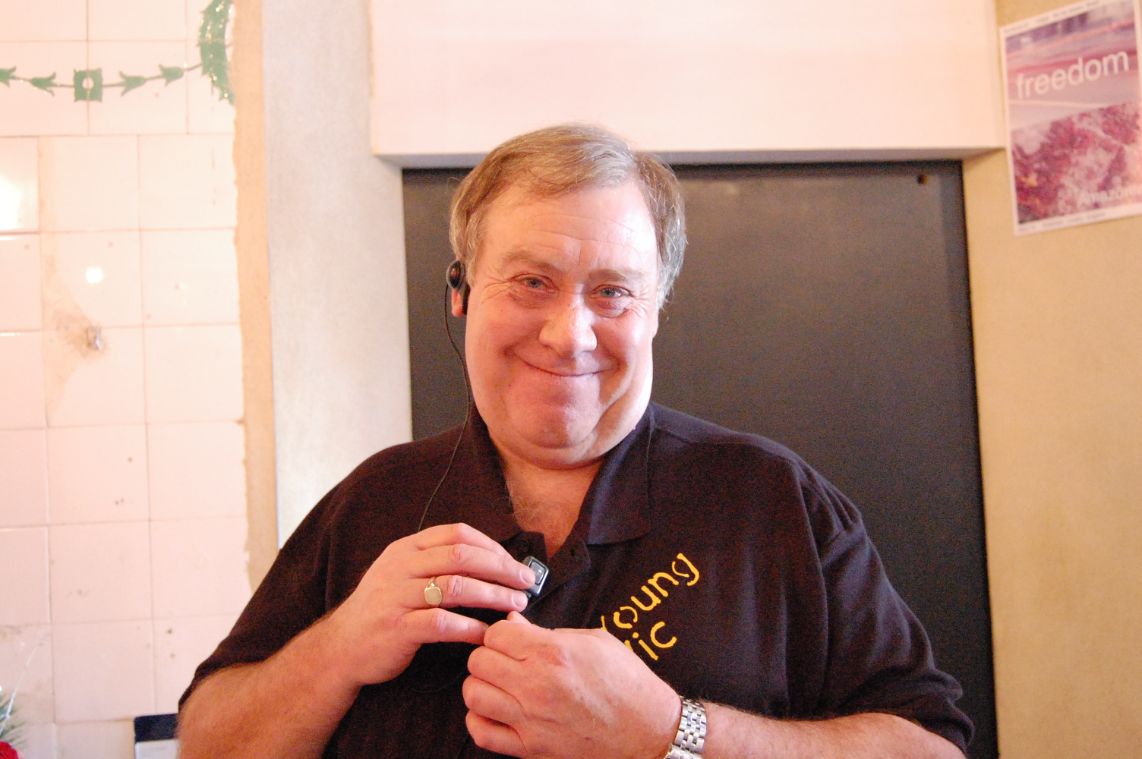 We couldn’t round out this decade without taking a moment to celebrate ‘Dave the Fireman’. He was our long-serving fire officer, and everyone who passed through the YV doors knew him. He was the welcoming heart of our building, with an exceptional ability to make everyone feel special. Sadly, Dave passed away in October 2009 at the age of 55. The footprints you’ll spot by the Young Vic Box Office are our permanent memorial to an exceptional soul.