On Wednesday afternoon, a small group of us gathered in the Young Vic foyer to embark on a touch tour of Life of Galileo, ahead of the audio described matinee. Anticipation was high – this was my first time; for some of my visually impaired fellow visitors, expectations were abound. It was led by Eleanor Margolis and Miranda Yates who facilitate all our audio described performances here at the Young Vic.

Simply, the idea of a touch tour – and indeed an Audio Described performance – is to give people who are blind or partially sighted the chance to enjoy the show in a way that is as close as possible to the full theatrical experience. The touch tour is facilitated by an Audio Describer, along with members of the FOH and technical teams, and usually takes place just before the show. It allows participants a tactile exploration of the theatrical space, getting up-close with the textures and shapes used in the costumes and props, to help provide a more rounded experience of the performance itself. 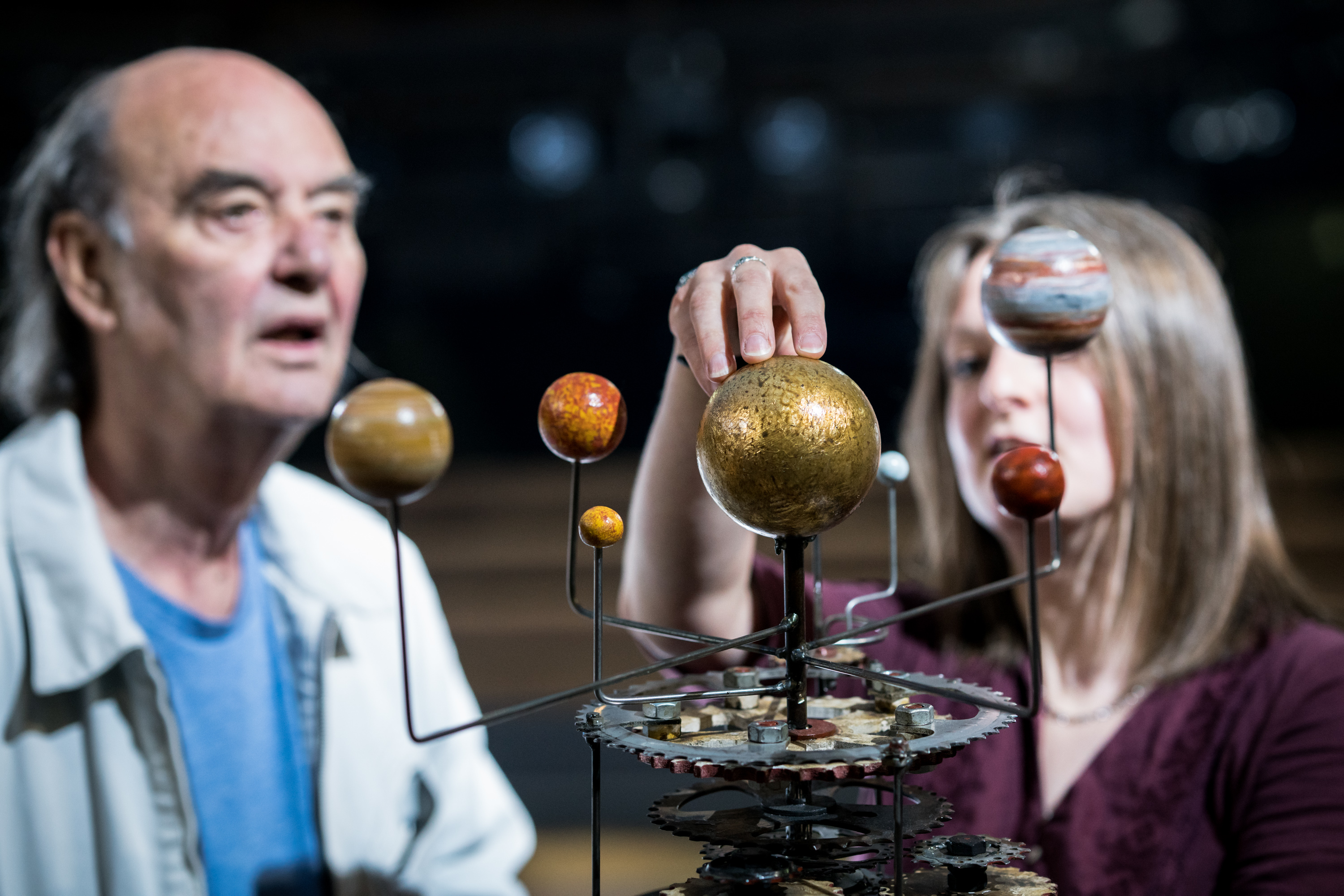 We started the tour with an impressively detailed description of the auditorium, starting from the structure of the space right down to the materials that make up the set.

“A broad set of steps made out of scaffolding and untreated wood about four meters wide sits in a dock in the back wall about 8 meters deeps and 10 meters tall” – this level of detail felt really quite remarkable, and continued throughout the tour.

As we started to move further into the space, onto the centre of the stage where a lucky few ‘floor seat’ audience members recline each night, some of the visitors noticed a reverb that isn’t obvious until you begin speaking yourself. It felt pretty unnerving, and people wondered aloud “how do the actors manage this every night?!” Apparently this strange echo disperses once the auditorium is filled with an audience.

Once we’d established the intricacies of the space, we moved on to explore through touch a wide range of different props and costumes used in Life of Galileo (let’s be honest, it’s what we were all most excited about anyway): 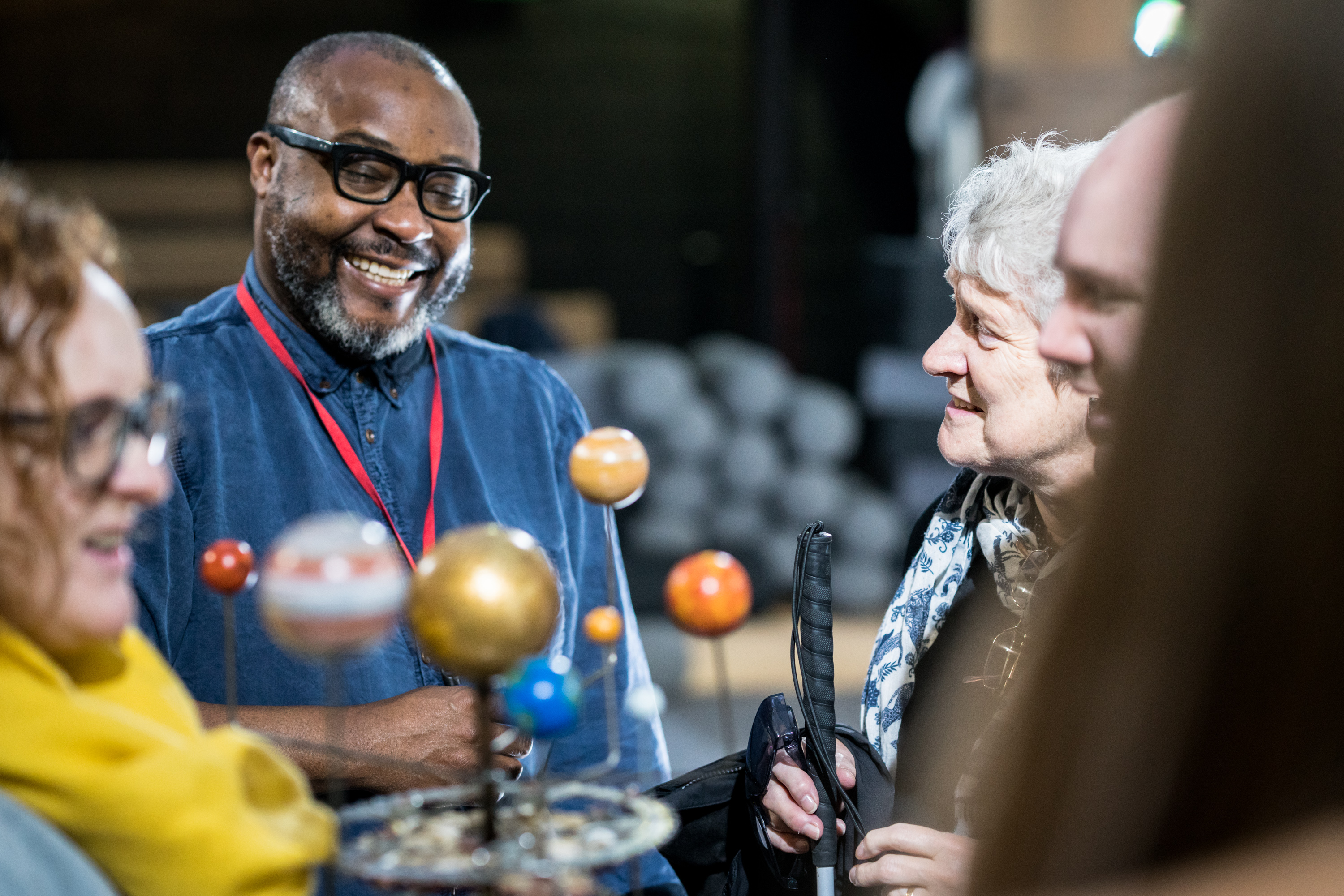 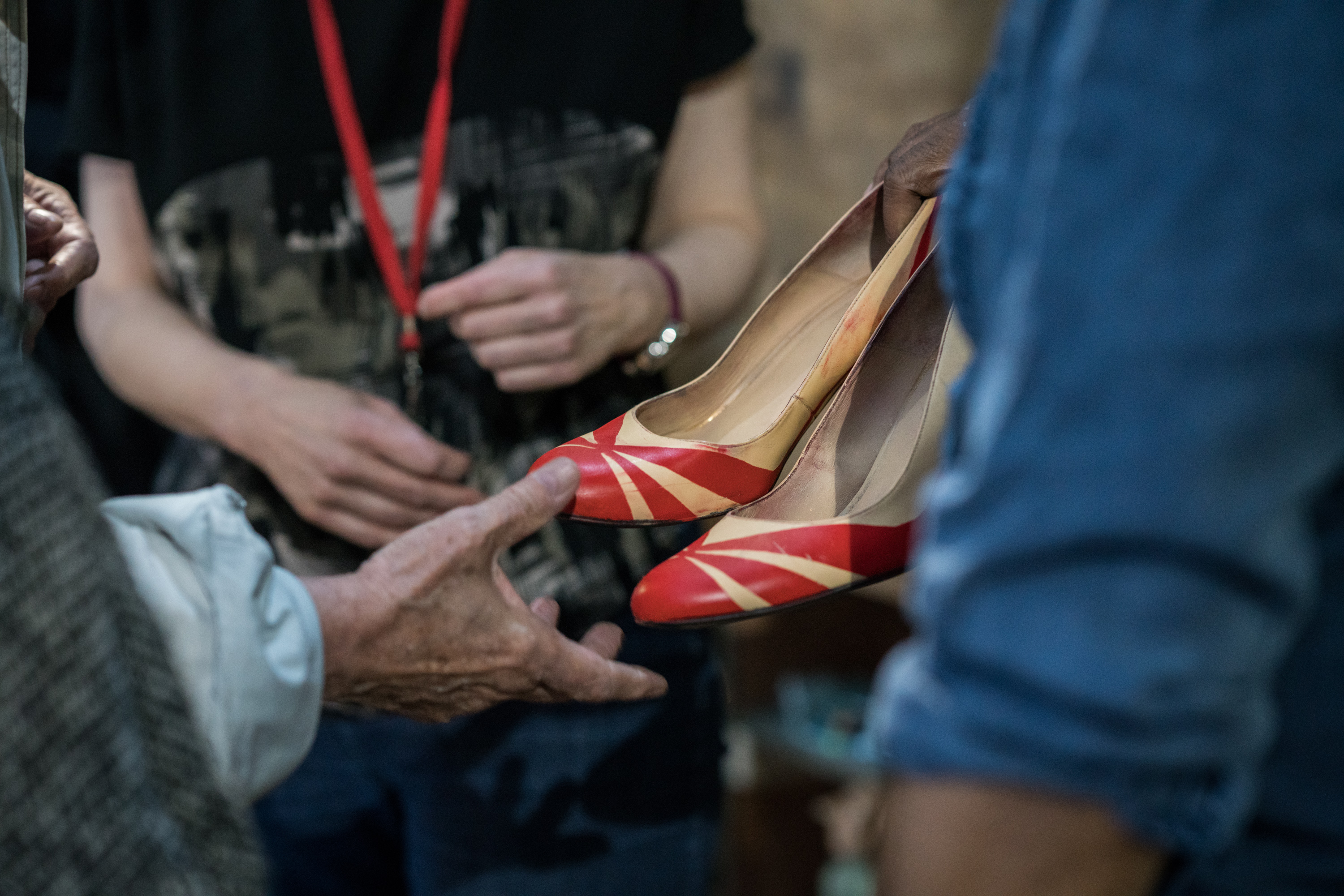 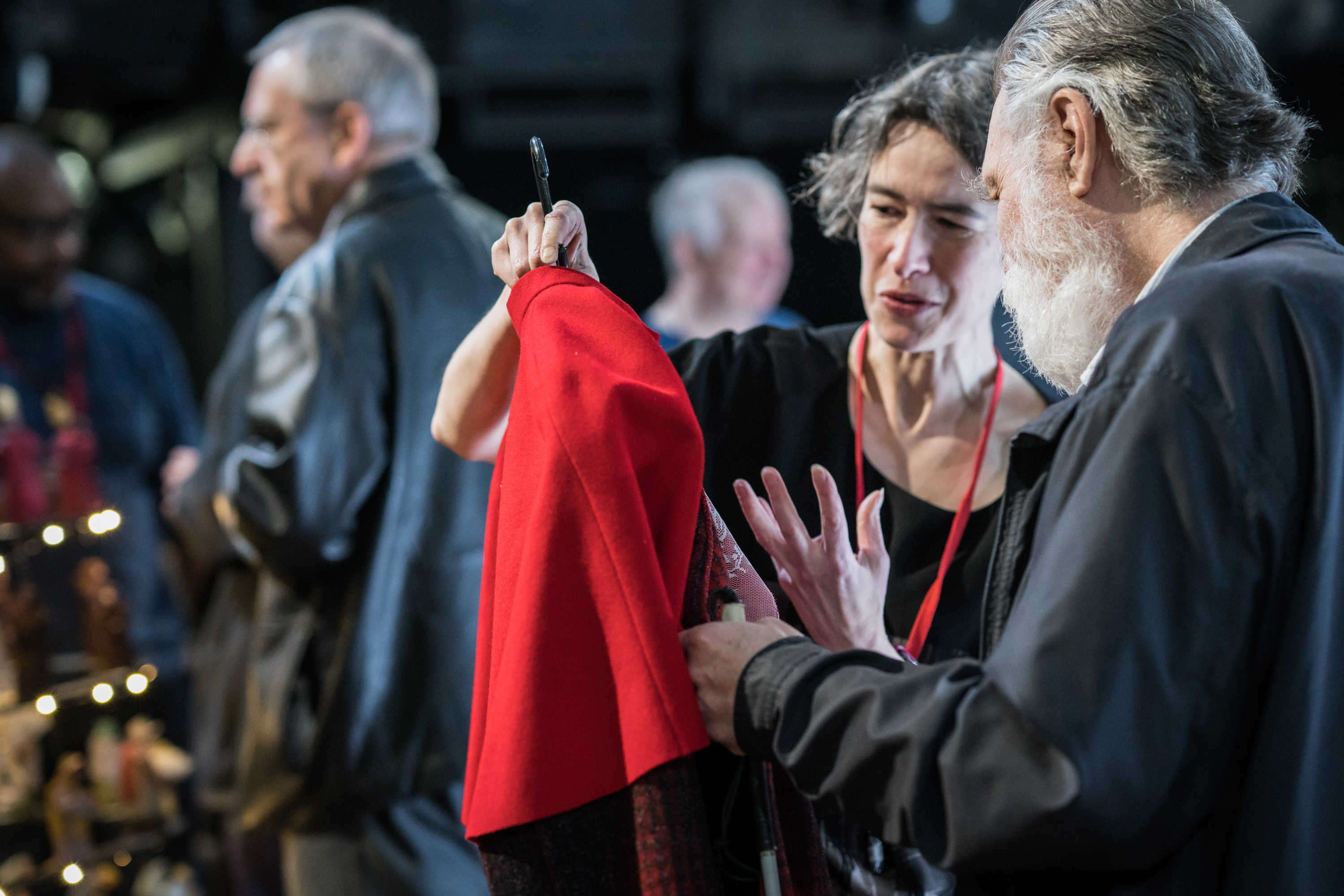 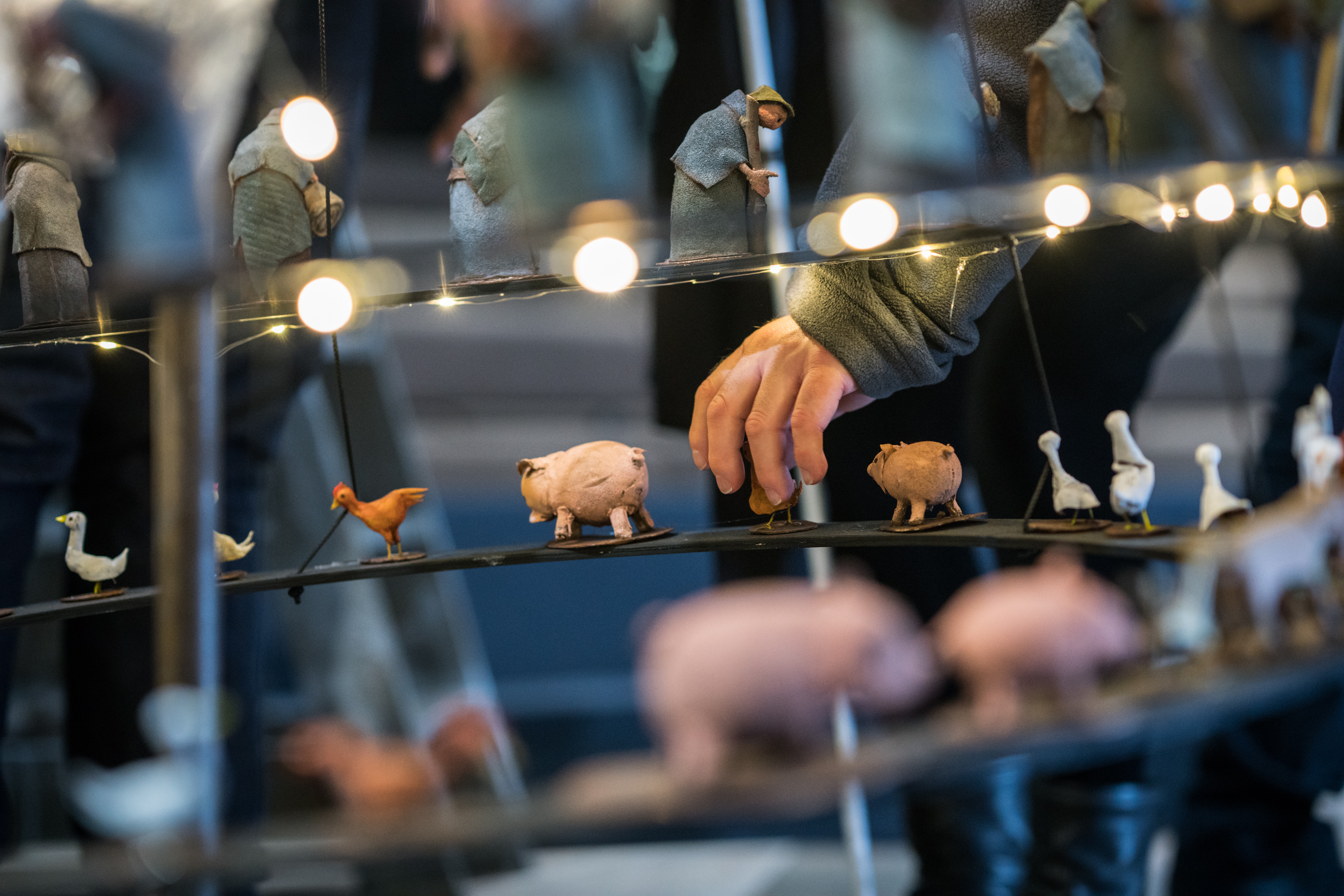 Above: visitors exploring props and costumes including a model of a planetarium; a pair of shoes worn by one of the Dancing Girls; a Cardinal's costume; and part of an amazing dress worn by actor Bettrys Jones in the Ballad, when she represents the Earth as the centre of the universe, complete with lights and tiny model animals.
Photography by Leon Puplett.

Many of the actors were on hand to tell us about the props and costume, so Eleanor stopped us for a moment so that the cast could introduce themselves. We heard first what they sounded like in reality, followed by their voices as each of their characters. This gave us the opportunity to differentiate between the multiple characters each of the actors play in Life of Galileo (40+!). Ayesha Antoine, for example, plays an old northern man at one point, and she was able to demonstrate the contrast between this character's voice and her other younger female ones. 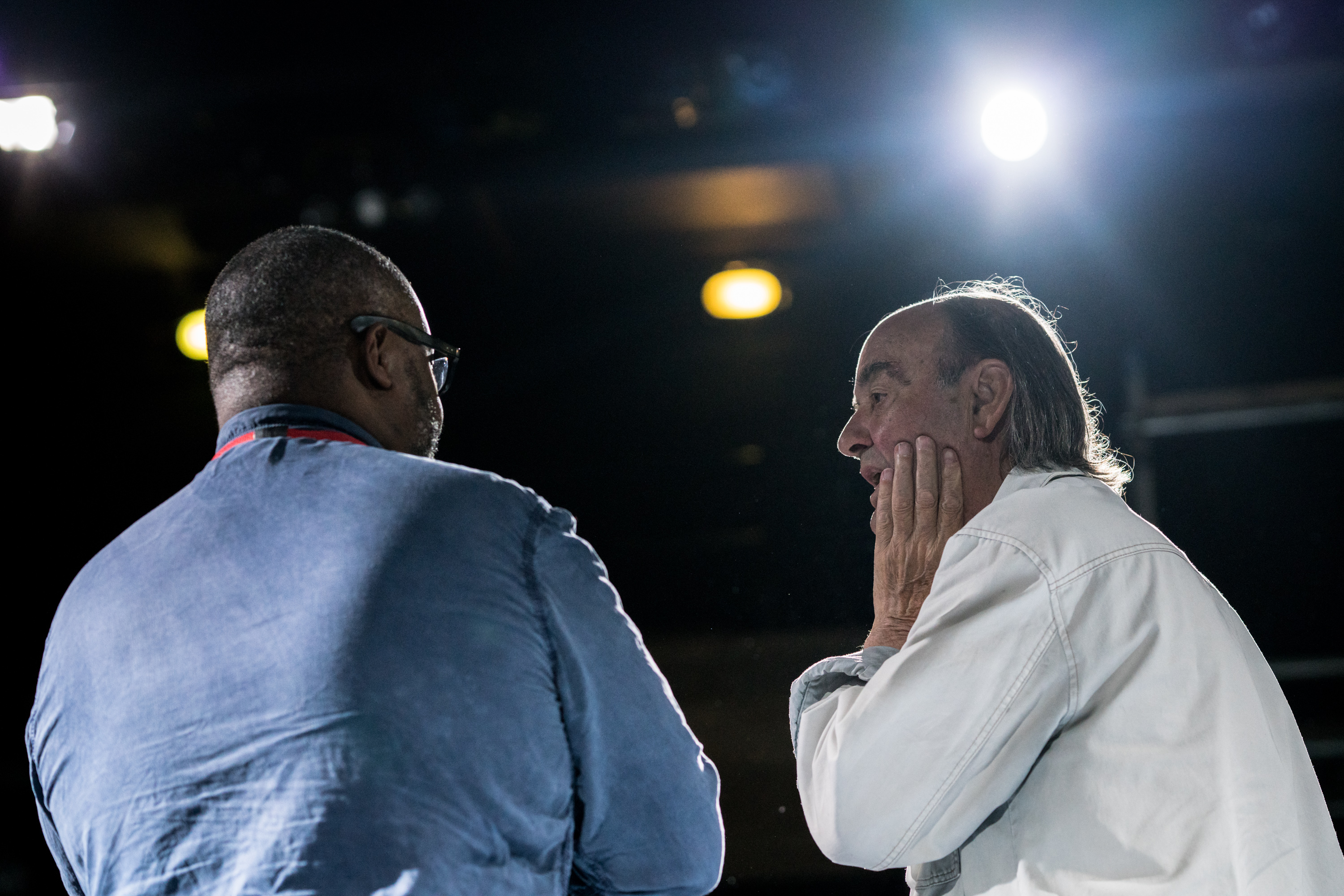 The music used in Life Of Galileo by the Chemical Brothers' Tom Rowlands is a significant and, at times, very loud part of the performance. Yamina, the Sound Operator, was on hand to demonstrate the 7K sound system and we were advised that this could actually make our bodies vibrate due to the bass. Playing sections of this music in advance meant participants felt comfortable knowing what was to come when entering the matinee.

Yamina also demonstrated the important ‘snap’ sound effect which signifies each scene and lighting change. We all agreed that hearing this in advance was helpful in getting an understanding of the way whole show was structured.

If you want to find out more about the Young Vic's touch tours, audio described performances or any other accessible performances we have on offer, just visit our Access for All page, give us a call on 020 7922 2922 (Textphone 18001 020 7922 2922) or ask one of our Welcome Team members next time you're here. We'd also recommend checking out VocalEyes for listings of the latest audio-described events (including Touch Tours) around the UK.